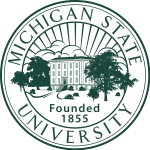 Michigan State University (Michigan State, MSU) is a public land-grant research university in East Lansing, Michigan. It was founded in 1855 as the Agricultural College of the State of Michigan, the first of its kind in the United States. After the introduction of the Morrill Act in 1862, the state designated the college a land-grant institution in 1863, making it the first of the land-grant colleges in the United States. The college became coeducational in 1870. In 1955, the state officially made the college a university, and the current name, Michigan State University, was adopted in 1964. Today, Michigan State has approximately 634,300 living alumni worldwide. The university is a member of the Association of American Universities and is classified among “R1: Doctoral Universities–Very high research activity”. The university’s campus houses the National Superconducting Cyclotron Laboratory, the W. J. Beal Botanical Garden, the Abrams Planetarium, the Wharton Center for Performing Arts, the Eli and Edythe Broad Art Museum, the Facility for Rare Isotope Beams, and the country’s largest residence hall system.